You are here: Home / Editorial / A Park-Building Revolution Is Transforming a Russian City 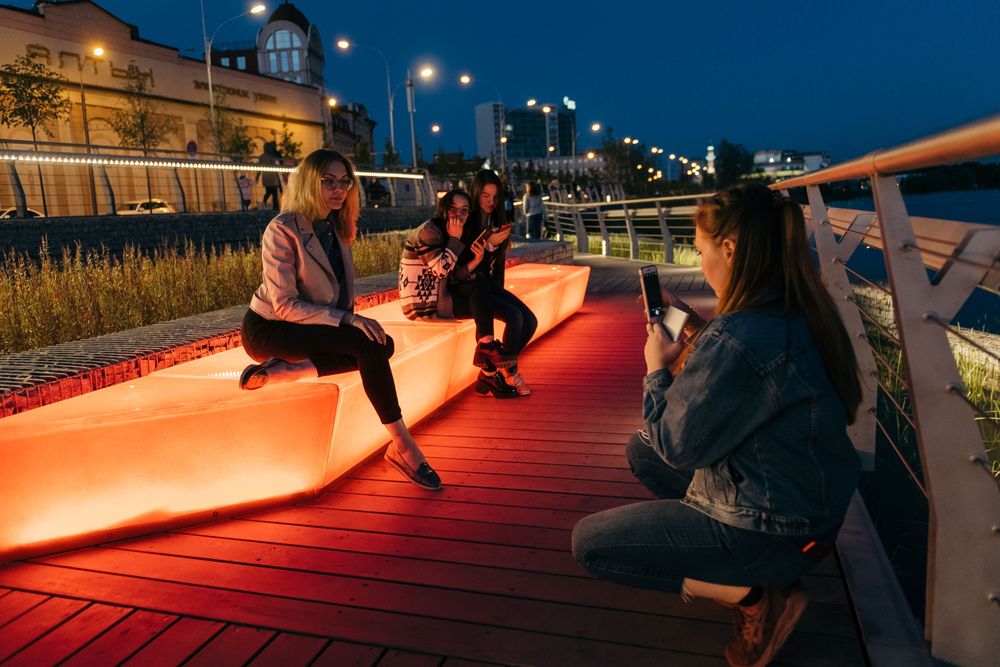 A public space initiative in the Tatarstan city of Kazan is using a participatory design approach to create hundreds of new projects.

In 2015, Natalia Fishman-Bekmambetova arrived in Kazan, capital of the semi-autonomous Russian republic of Tatarstan, to oversee a large public works program. Then only 24 years old, she found a city with a population of 1.7 million, a renowned university, grand boulevards and major historic sites, including a Unesco-listed walled Kremlin from which Mongols once ruled.

But Kazan also was a typical post-Soviet city — surrounded by drab concrete tower complexes and parking lots. Since the fall of the Soviet Union in 1991, little attention had been devoted to revitalizing derelict public open spaces or to building new ones.

Six years after Fishman-Bekmambetova’s arrival, a massive initiative often referred to as a “green revolution” has dramatically reshaped this city 450 miles east of Moscow. Tatarstan’s Public Space Development Program, launched by Fishman-Bekmambetova and Tatarstan President Rustam Minnikhanov, has created or upgraded more than 420 projects throughout the republic, including parks, walkways, gardens and other kinds of landscaped areas.

You don’t have to walk far in Kazan to see how the new public space program has changed the city. Near the center of the city is the Lake Kaban Embankments, designed by the Chinese-Russian consortium Turenscape +MAP and completed in 2017. The project transformed a formerly deserted postindustrial site around three lakes into a waterfront promenade with rows of trees, beds of wild grasses and wooden decks. At night, the area is illuminated by lights inside glowing red benches of diaphanous resin. Huge fountains rise on the lakes; restored wetlands help clean the once-heavily polluted water.

Southeast of the city, Fishman-Bekmambetova’s team oversaw the rebirth of the 87-hectacre Gorkinsko-Ometevsky Forest, a new park that features a ski hill and an eco-playground along with preserved woodlands and performance spaces, located on a site where local activists successfully defeated the construction of medical centers and a planned road that would have bisected the park.

The most ambitious project in the works for Fishman-Bekmambetova’s team is the Kazanska River Strategy, a plan for a 22-kilometer stretch of urban river and 68 kilometers of embankment running the entire length of Kazan; it’s one of the largest landscape projects in Russia.

The effort has garnered much international attention: In 2019, Kazan hosted the World Urban Parks conference; that same year, the Aga Khan Foundation awarded Tatarstan’s public space development program its prestigious Architecture Award. But according to Fishman-Bekmambetova, the team’s most meaningful achievement has been to democratize the design process. The Tatarstan initiative adopted a process known as participatory environmental design, a discipline pioneered by U.S. architect Henry Sanoff. Each project is preceded by extensive public meetings and surveys, even though this kind of outreach can delay projects and result in time-consuming revisions.

“We come and ask people what they want done, what they want preserved, and what they want to go,” Fishman-Bekmambetova said in phone interview. “And if less than three-quarters of the people are happy, we change the project according to their comments.”

Community input traditionally has not been a major part of decision-making in Russia. But the participatory design approach Fishman-Bekmambetova initiated in Tatarstan has since become the template for open-space development in many regions throughout the country.

“The non-democratic approach is more efficient in the short term, but the greatest danger is losing common sense.”

Fishman-Bekmambetova launched her career with the 2011 renovation of Gorky Park, widely hailed as a catalyst for the revitalization of Moscow’s public spaces. There she met Minnikhanov of Tatarstan, who invited her to move to Kazan to work on the public space initiative.

Not long after her arrival in Tatarstan, Fishman-Bekmambetova’s work began receiving national acclaim, and in 2017, Andrey Chibis, then the Russian Federation’s deputy minister of Construction, Housing and Utilities, tapped her to establish a federally funded municipal public space program. A key reason that regions across Russia were inspired to emulate Tatarstan’s program, Fishman-Bekmambetova says, was because of its success in keeping costs down. “It was hard for people to imagine that we could get similar-quality public spaces to Moscow,” she said, “but when it became obvious that we didn’t need Moscow[-level] money, it quickly became federal.”

The program’s emphasis on community engagement can end up making projects more affordable, says Fishman-Bekmambetova, by keeping their scale and ambition under control. “The key thing here is to really cater to the desires of the people and not to allow architects to bring to life the craziest of their dreams,” she said. “For certain people, the idea of success is to get a picture of their project into an architecture magazine, which means you have to do something extraordinary to overwhelm the imagination of some architecture critic.”

Indeed, Tatarstan’s winning of the Aga Khan Award had more to do with the overall social impacts of the project than the designs themselves, says Anna Grichting, a Switzerland-based architect who served as technical reviewer for the prize and visited public spaces in parks throughout Tatarstan. “The public spaces were high quality,” she said, “but it was more the program and the strategy, and the fact that it is already having an impact on park development throughout the Russian Federation.”

Public open space is an increasingly scarce resource in parts of the world undergoing rapid urbanization, and the Covid-19 pandemic has underscored how critical it is for livability. Tatarstan’s experience could offer a model for other global cities, says Grichting. “The ambition is that every municipality should have good public space,” she said. “Today, at places like UN Habitat, everyone is talking about how we are all going to be living in cities. But we also have to think about rural areas, and maybe provide reasons for people to stop moving away from them.”

Grichting is editing a book with Vicente Guallart about Tatarstan’s initiative, How a Willow Tree Changed Russia: A Manual for a Participative Public Spaces Design in the Republic of Tatarstan.  She describes the ways public investment in park projects can have economic multiplier effects, by increasing employment opportunities. More than 40 Tatarstan-based companies are building “street furniture” and park fixtures such as benches for the republic’s new stock of green spaces. (Previously, street furniture in Tatarstan was primarily produced by prison labor.) In addition, thanks to the efforts of Fishman-Bekmambetova, there is now a public architectural bureau, known as ArchDesant, which is staffed primarily by female architects and designers under age 30.

It’s a revolution with American roots: Sanoff’s approach to participatory design was initially introduced to Russia by Project Group 8, a Vologda-based activist design collective that has collaborated on projects with Fishman-Bekmambetova and is known for publishing the first Russian translation of Sanoff’s seminal work Community Participation Methods in Design and Planning. The group also founded the Russian Participation Design Network.

But there are major differences between Russian and Western-style planning and building processes. Answering directly to Tatarstan’s president allows Fishman-Bekmambetova to slice through many of the bureaucratic hurdles and environmental reviews that drag out the timelines of projects in the West. On the other hand, she says, much time is devoted to addressing community concerns — which is now a legal requirement for federally funded open space projects throughout Russia.

“The non-democratic approach is more efficient in the short term,” she says, “but the greatest danger is losing common sense, as was the case with Robert Moses.”

Edouard Moreau, principal in Orchestra Design, an architectural and urban planning firm with offices in St. Petersburg and Paris, was hired to lead the planning for the Kazanska River project. He says that he is impressed with how the city’s administration has been able to prioritize restoring the river’s ecology by diverting roads and development projects that had been planned nearby. “Kazan in general is car-based,” says Moreau. “With this strategy, we want to promote a less car-oriented city.”

Even with time allocated to community engagement during the design process, the top-down nature of authority in Russia makes it significantly faster and cheaper to build there, he says. “As soon as you have the green light from the top, everything flows very quickly.”

While Fishman-Bekmambetova’s team borrows ideas and strategies from around the world, her embrace of participatory design is inspired in part by her understanding of Russian history — which could also be a lesson for other cultures. “I feel that people don’t learn anything from the Russian Revolution,” she says. “If you don’t respect the vision of the people and there is an aesthetic elitism, you end up with people not feeling welcome. And when a lot of people start feeling unwelcome, they get angry.”