You are here: Home / Editorial / Narrow Streets Do More With Less 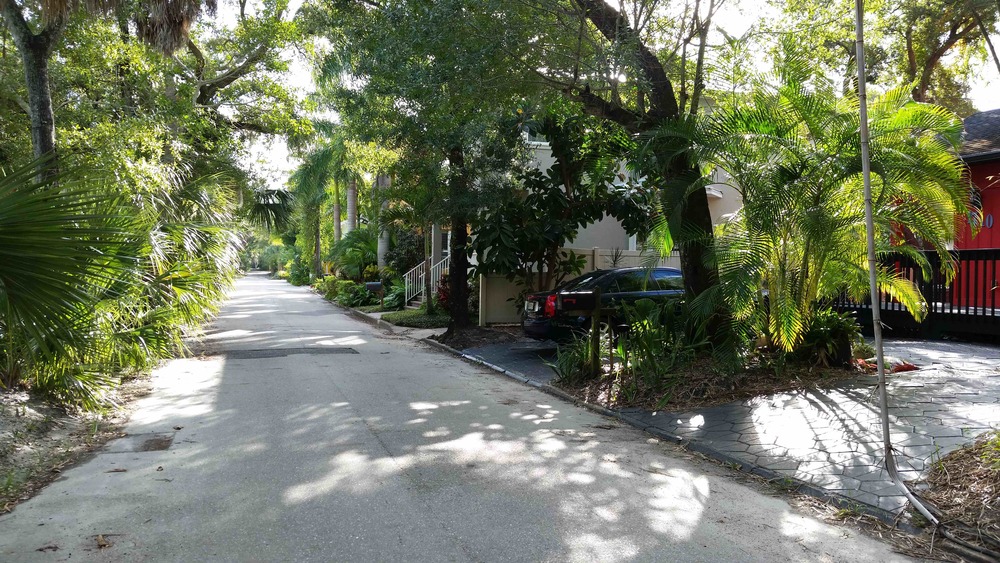 I love to cook. And I’m always up for a challenge in the kitchen —a cuisine I haven’t tried before or a complicated gourmet recipe. But one of the best pieces of cooking advice I’ve ever been given came very early on, from my dad. He told me that, when it comes to preparing an enjoyable dish, less is often more. Thoughtful execution of a simple concept outweighs a huge list of ingredients any day.

The same lesson applies to urbanism: In creating a great place, less is often more. The “recipe” for a good urban street is in fact remarkably simple, which is why societies all over the world have been able to replicate it, with some variations, for thousands of years. 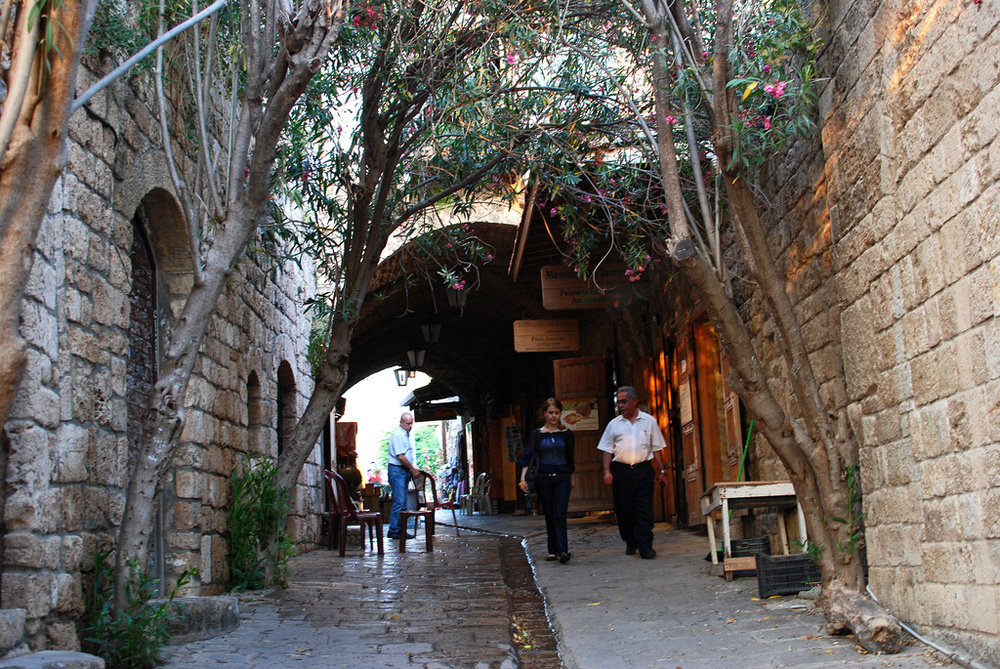 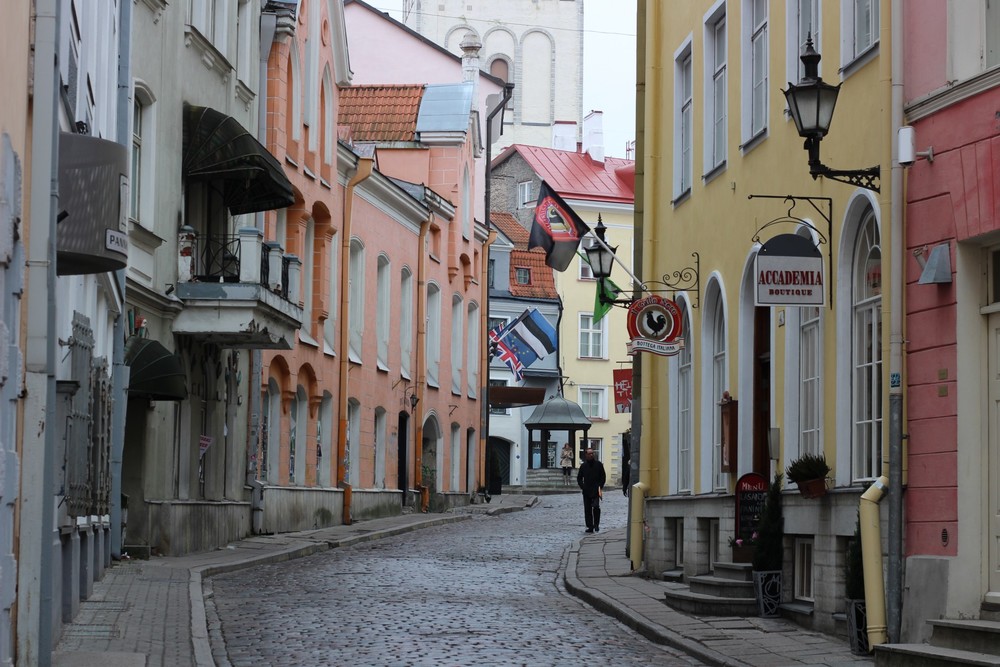 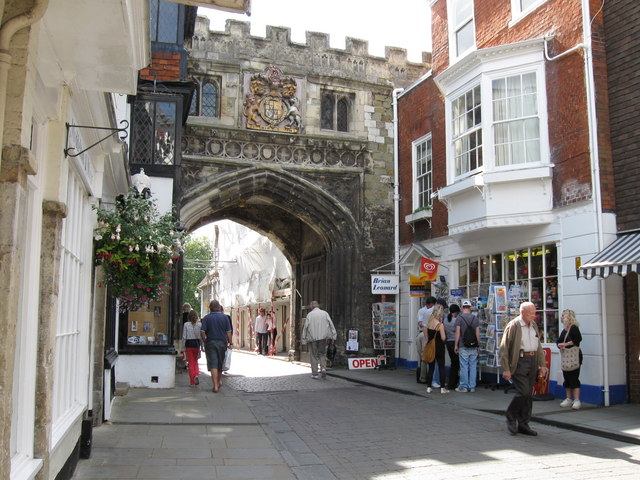 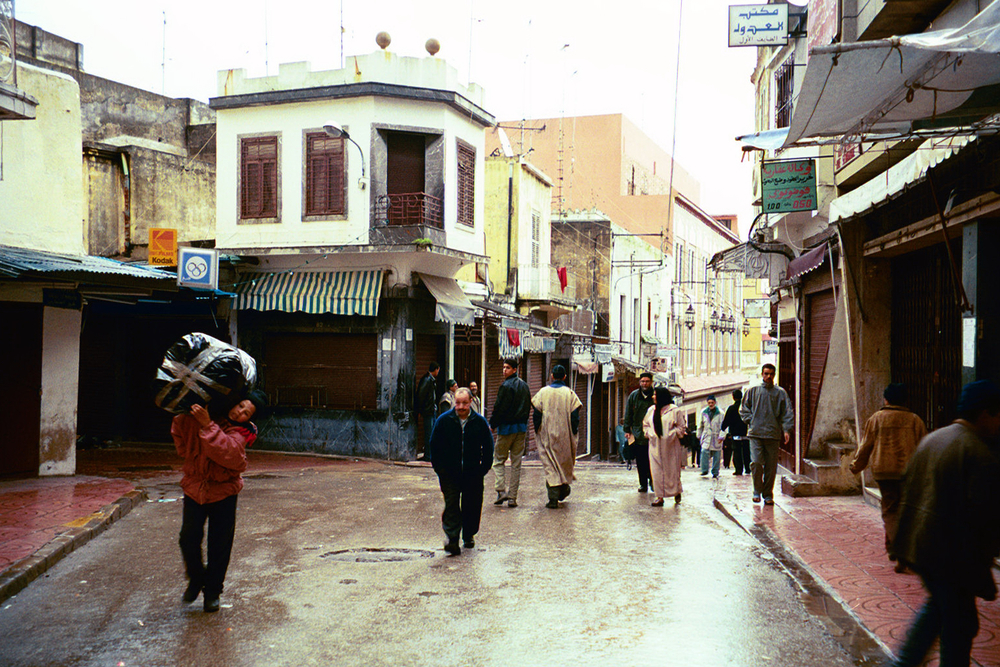 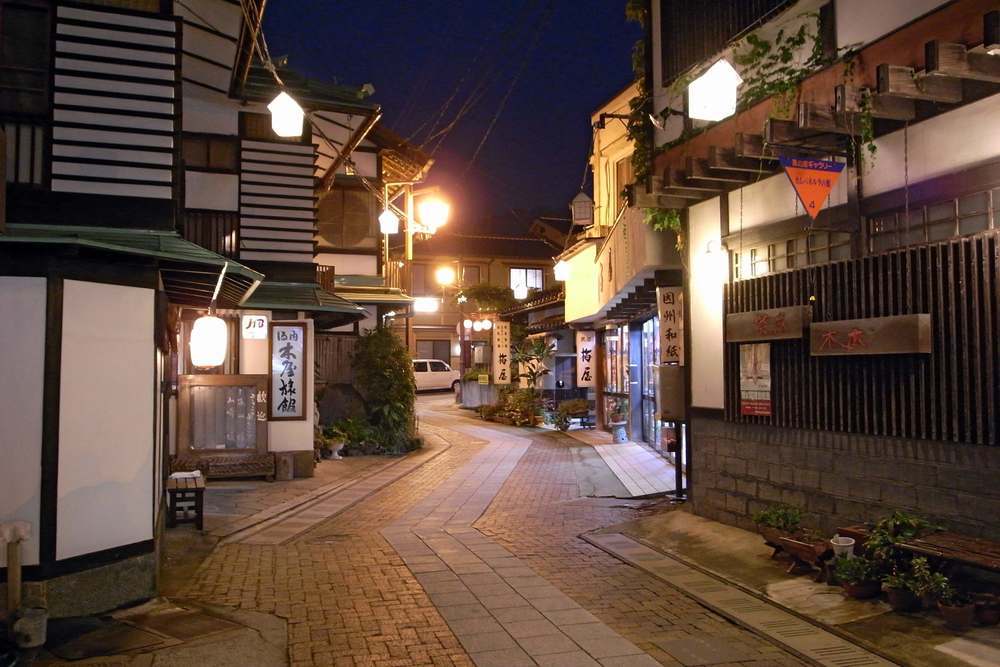 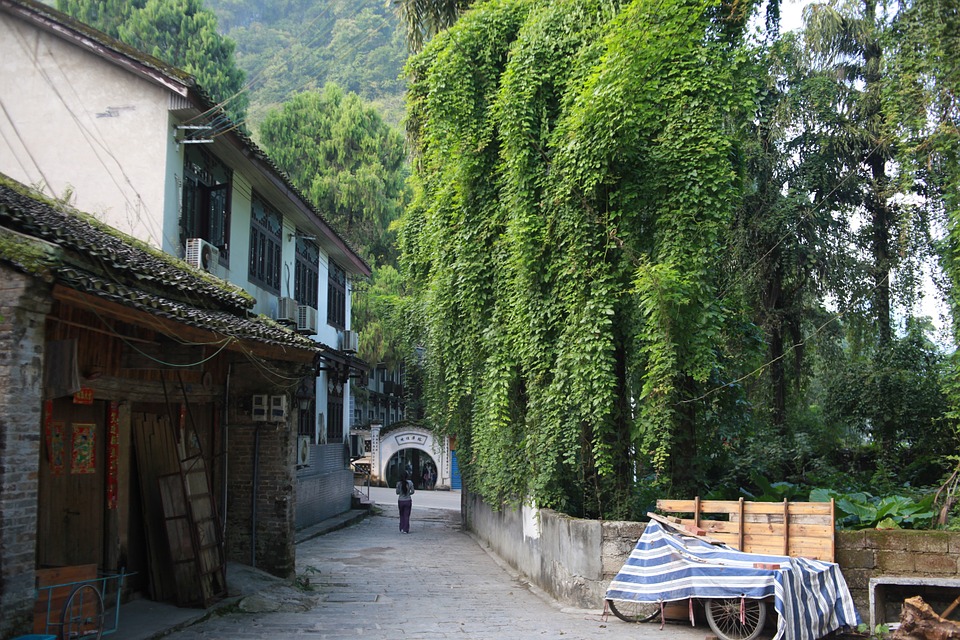 (All above images from Wikipedia)

This is good news for Strong Towns advocates concerned about the fiscal sustainability of our cities too, because simple design means less money that must be spent to build and maintain our public realm.

Yet this is a point that’s often not embraced by much of the urbanist community—people who are the Strong Towns movement’s natural allies in terms of many of our principles and goals. In particular, I would point to the Complete Streets movement that has made such inroads in urban street engineering in the last couple decades, including its adoption as policy in many local public works departments.

Complete Streets is the principle that urban streets should accommodate all users comfortably and safely, not just automobile drivers. In practice, it tends to be understood and applied as the universal provision of sidewalks and bicycle infrastructure alongside motor vehicle lanes. I would argue that Complete Streets advocates often fail to appreciate the ways in which a simple design can not only accomplish the same goals as a complicated one, but can actually outperform the complicated option. 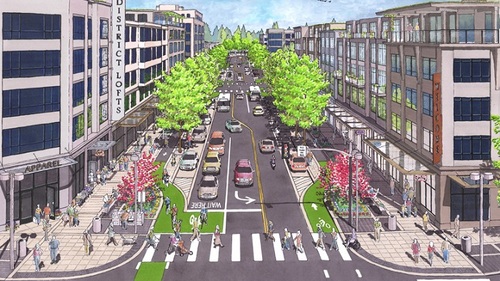 Now, let me be clear that I’m not attacking the idea of Complete Streets, an idea that is well-intentioned and has done a lot of good. There’s no question that pedestrians and cyclists are getting a level of much-needed policy attention lately that they were deprived of in mid-20th-century American cities. For example, four-lane death roads used to be standard design practice. (Thanks to Bill Lindeke of Streets.mn for the evocative term.) Now they’re pretty universally deplored, and most cities are working to phase them out when the time comes to reconstruct or restripe arterial streets. This is a good thing.

Yet the ways we have begun to retrofit auto-oriented streets for a wider range of users tend to still be a case of using the master’s tools to demolish the master’s house. The mindset of the engineer, not the artist or the chef, predominates to an unhealthy extent in the way we approach streets. We rewrite standards and rule books. We apply the new standards in every bit as formulaic and context-insensitive a fashion as we used to apply the old standards (those old standards being, basically, “maximize vehicle Level of Service above all else”).

A Google image search for “complete streets” confirms this. At a glance, we see a slew of examples of overengineered and overdesigned places that, while they may be improvement over what passed for state-of-the-art street engineering 50 years, are costing us money we don’t have and money we don’t need to spend. By applying a uniform rule book, we tend to fix things that aren’t broken. In the worst cases, we get completely ludicrous results.

Old Bradenton Road through my neighborhood in Sarasota, Florida used to be an utterly typical 2-lane collector street. It has a 30 mile per hour speed limit, pretty low traffic volumes, and narrow, mediocre but functional, sidewalks. 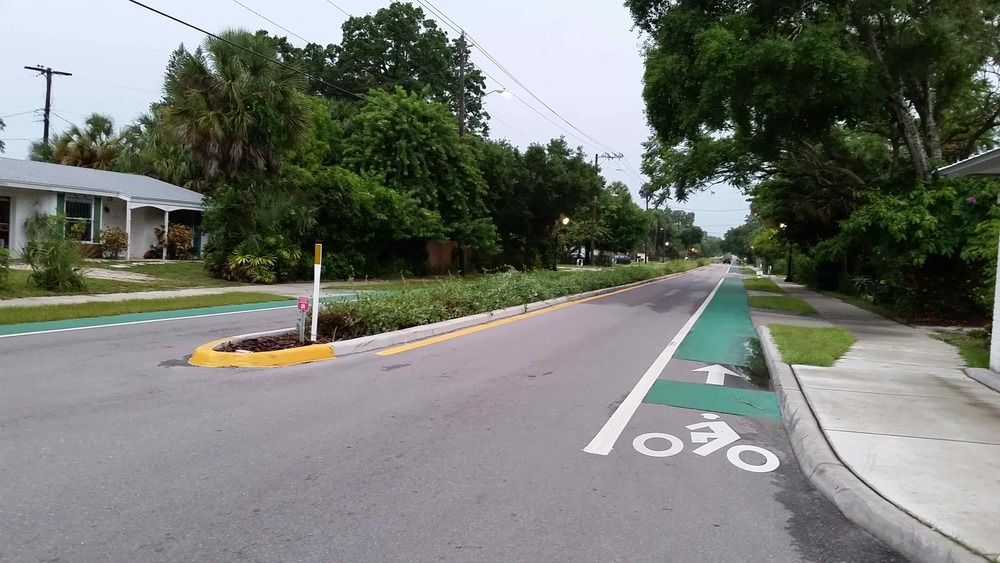 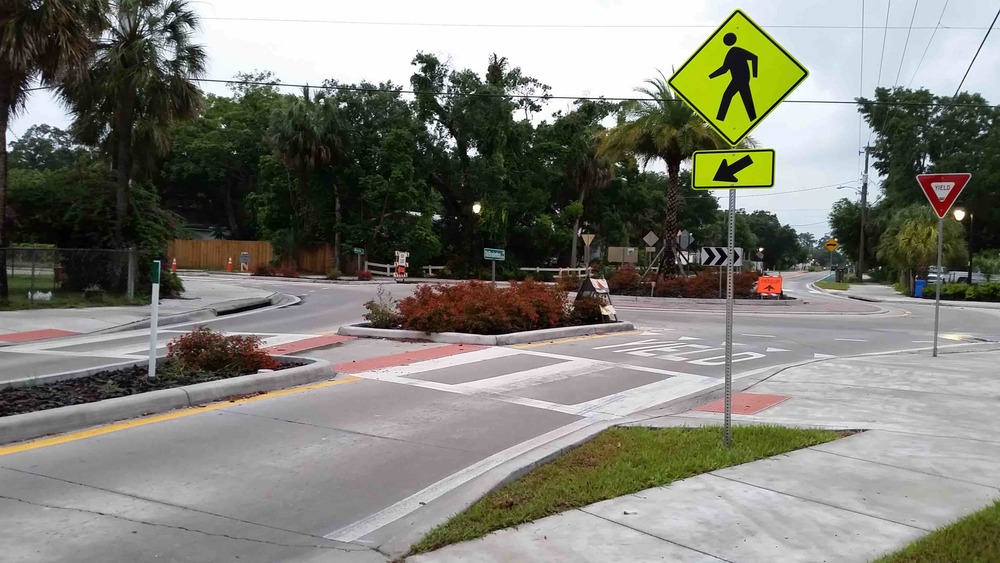 planted medians with low curbs over which you can make a left turn: 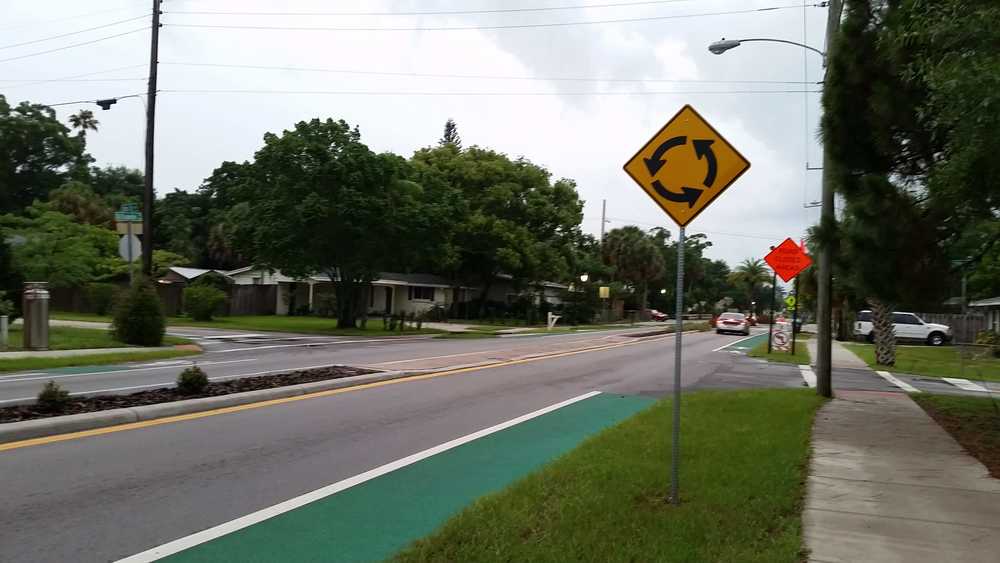 All of this looks nice. It’s well-executed. It feels safe and comfortable and pretty. But it’s just… a lot. I have to wonder how much they spent to fix something that, at least in my view, wasn’t really that broken to begin with. I walked and biked on this street before it was reconstructed. I never felt in any danger. The traffic volumes were low enough, and speeds reasonable enough, that it was fine.

Meanwhile, in the state with the highest pedestrian death rates in the country, I can think of literally dozens more collector and arterial roads nearby that are far more in need of a retrofit than this one was. Places in which you are genuinely taking your life in your hands by deigning to walk.

I know many, many factors—logistical, economic, and political—go into the decision of which streets get redesigned when. The point is not to armchair-quarterback those decisions. Rather, I am arguing for frugality and simplicity as higher principles when those redesigns do occur. This is important because there’s so, so much work to be done to reclaim our cities for human beings, and so little money available with which to do it.

Let’s talk about sidewalks for a minute. You will find, among engineers and many urbanist advocates, near-universal agreement that sidewalks are an essential component to pedestrian safety and walkability.

In a lot of environments, sure. They are. I would never argue against retrofitting a busy arterial with sidewalks, for example. But for neighborhood streets, some of the most pleasant residential areas I know don’t have any. 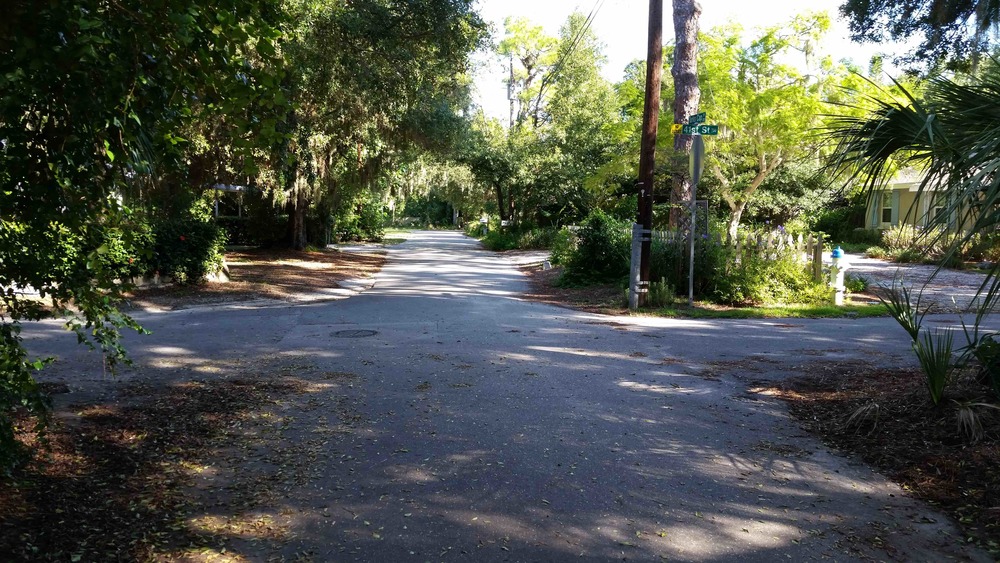 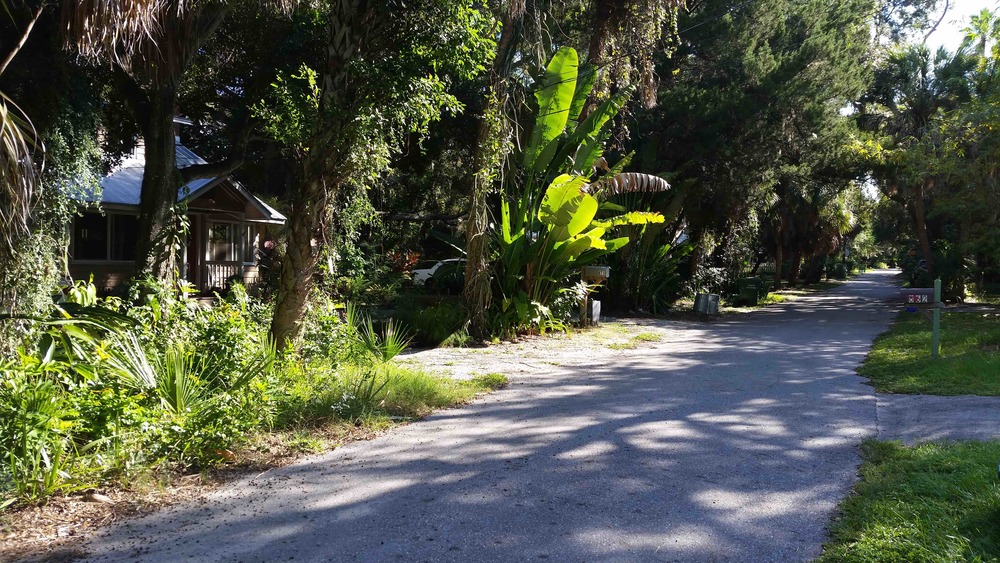 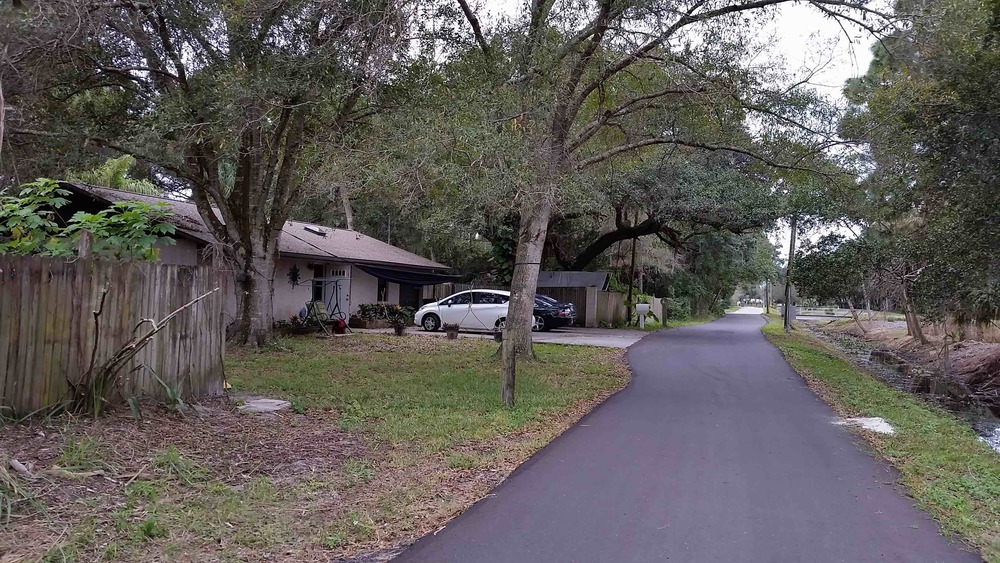 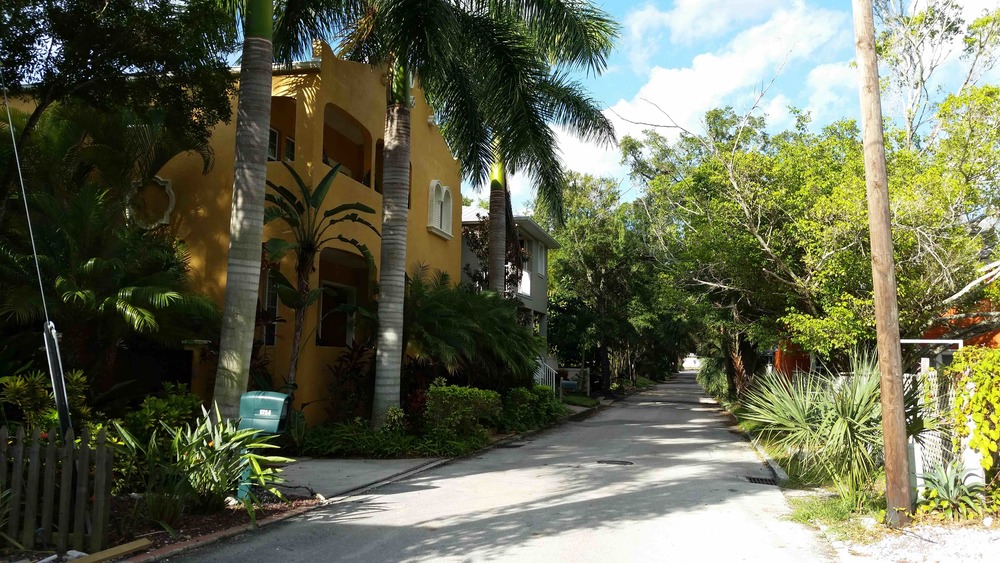 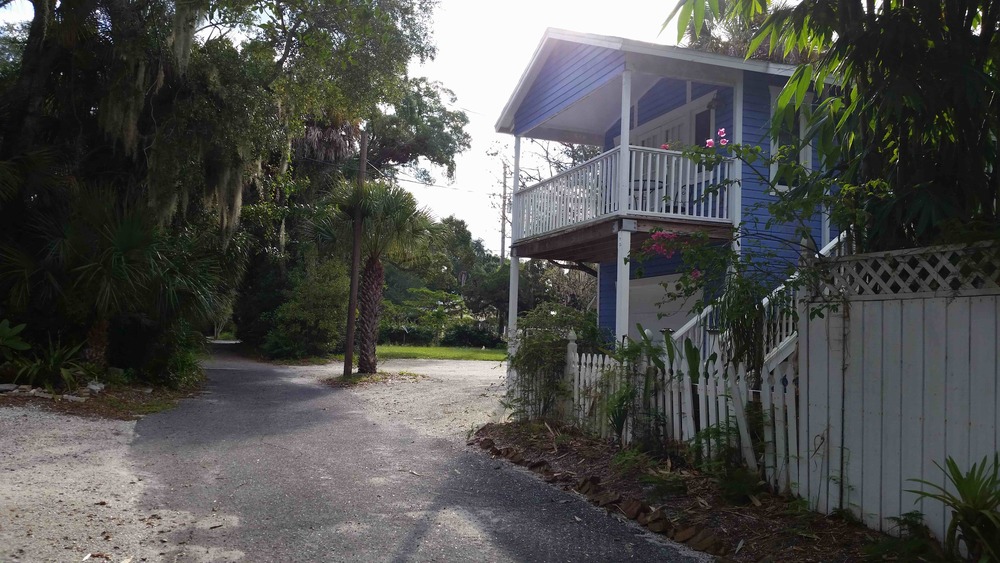 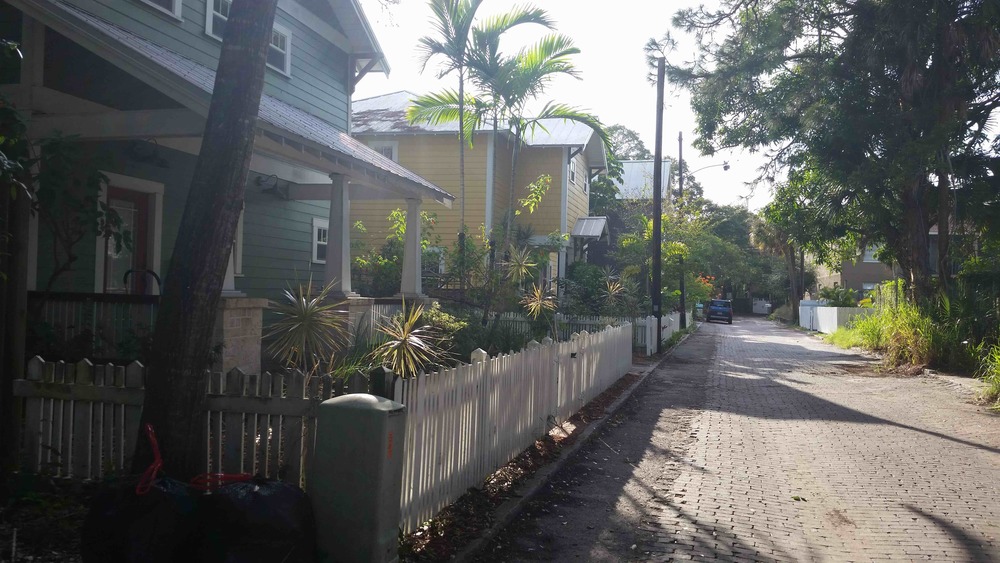 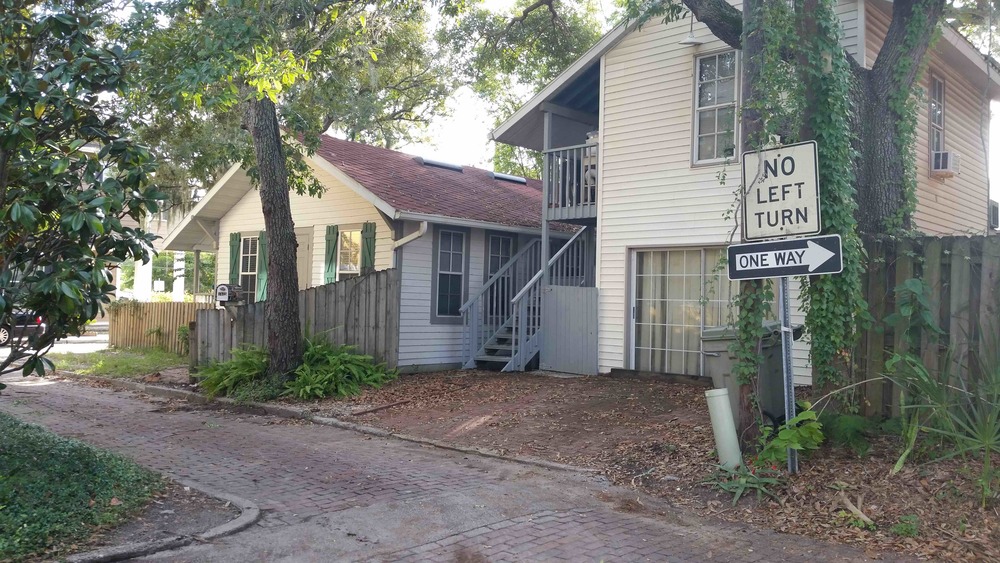 These are all from older neighborhoods of Sarasota, which to the best of my knowledge have never had sidewalks. Pedestrians, bicyclists, and drivers share these streets comfortably. None of them carry a lot of through traffic, and crucially, none of them carry fast traffic.

The defining feature of all of the streets pictured above is that they are very narrow. Narrow enough that it’s uncomfortable to drive any faster than about 20 miles per hour on them, especially when parked cars are present on both sides, requiring a certain amount of weaving around them. 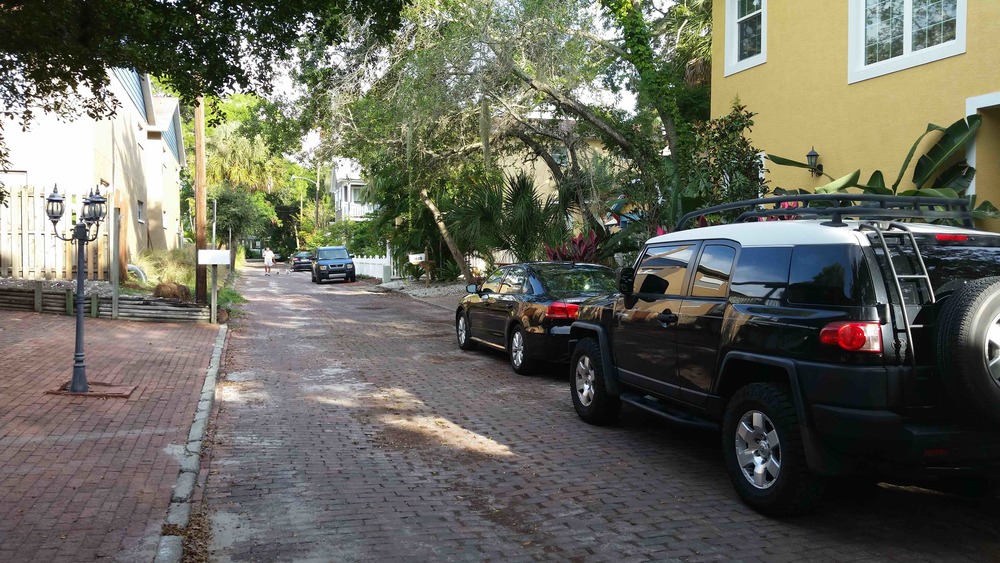 A one-lane bridge does wonders. 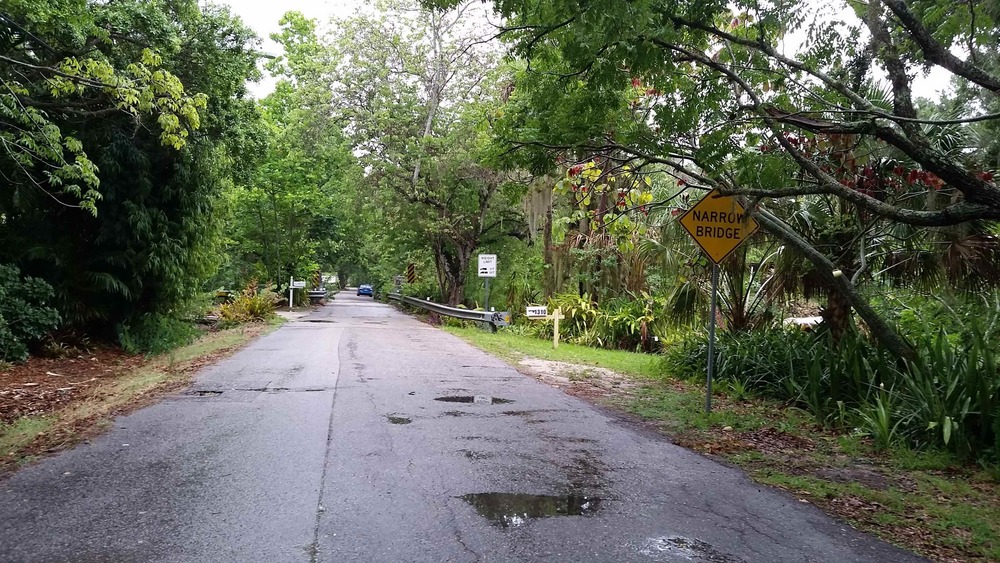 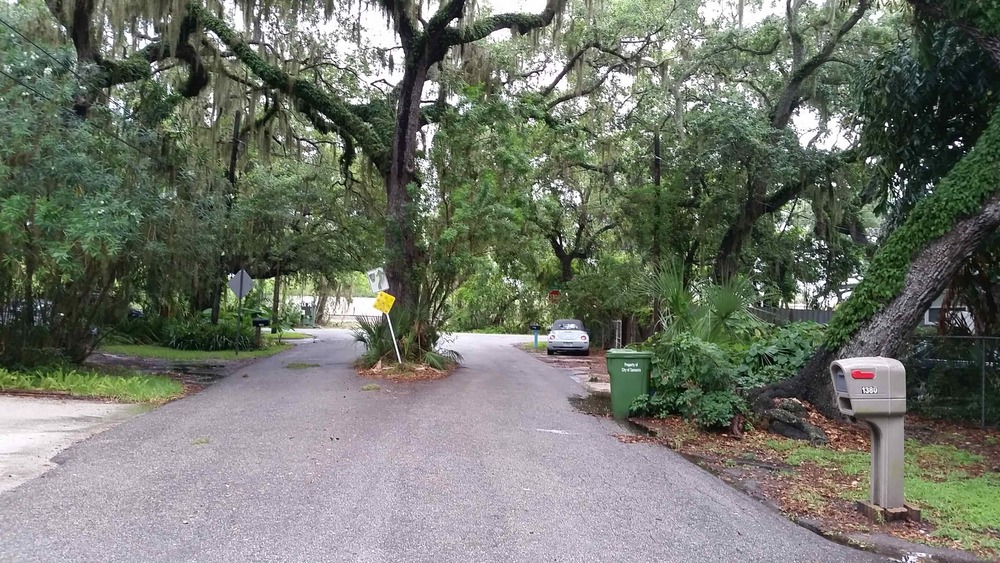 Narrow streets confer aesthetic benefits too, not just safety benefits. You can have a canopy of trees overhanging the entire street. In Florida in June, let me tell you, that “jungle” feeling in older neighborhoods like mine is a godsend.

With narrow streets and generous foliage, you can pack in quite a bit of population density, too, in a way that doesn’t feel “dense” and “urban” to people, and is thus perhaps less objectionable to aesthetic sensibilities. 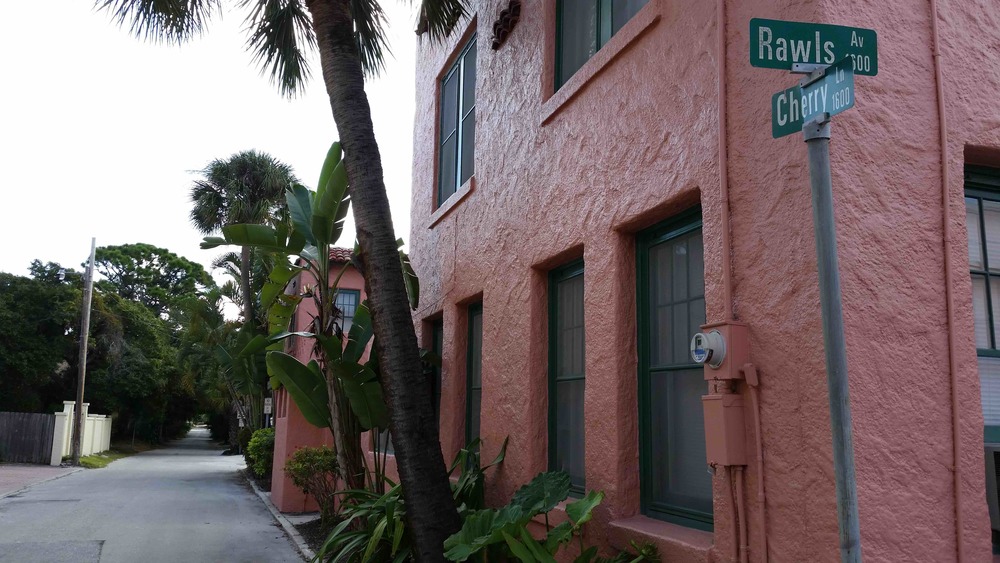 And these streets are just… fun. My favorite places have a certain amount of chaos and irregularity to them. It makes for visual and tactile interest. I think a lot of urbanists feel that way. The novelty and variety is what we like about cities and dislike about master-planned subdivisions. But that chaos can also serve practical functions that are worth analyzing and appreciating.

This is not a new argument, and I’m not trying to pretend there’s anything novel about it. Urban designers and transportation planners far more experienced than I have analyzed woonerfs and shared space to death. The idea that a certain amount of unpredictability in the driving experience calms traffic by making motorists pay more attention has also been the subject of a lot of study.

Yet that study is often focused on the results of the kind of standardized treatments we apply, often at lavish expense, when we do a road diet. Less attention gets paid in professional circles to the natural experiments in traffic-calming that are right under our noses. In the worst case scenario, we view these places that work perfectly well as-is as “outdated” streets that ought to be “upgraded” to “meet the standard.”

Even where the “standard” has come a long way from four-lane death roads, this is the wrong mindset—it’s still the master’s tools. Too much theorizing, not enough observation.

We do need best practices for the new stuff we build, of course. One “best practice” I would advocate for is that we simply make new residential streets as narrow as possible whenever possible. If two cars going in opposite directions can pass each other at more than 10 mph, on a residential street that doesn’t serve any significant through traffic, the street is too wide. I think we should celebrate older neighborhoods that are built this way, and emulate the model going forward. It’s cheap, it’s effective, and it’s simple—very few ingredients required.

I think these places offer a nice counterpoint to the engineering mindset of standards, standards, standards. They make a case for a different sort of professional best practice, one that Jeff Speck eloquently made the case for in the Atlantic’s CityLab last month: pay attention to what already exists and works. Then do more of it.

(All photos by Daniel Herriges unless otherwise noted)

Daniel Herriges (Twitter: @DanielStrTowns) serves as Content Manager for Strong Towns, and has been a regular contributor since 2015. He is also a founding member of the organization. Daniel has a Masters in Urban and Regional Planning from the University of Minnesota. His obsession with maps began before he could read. His budding environmentalism can be traced back to age 4, when he yelled at his parents for stepping on weeds growing in sidewalk cracks. His love of great urban design and human-scaled, livable places has also been lifelong. Daniel has a B.A. from Stanford University in Human Biology with a concentration in Conservation and Sustainable Development. After college, he worked as an environmental activist for several years, in support of indigenous people’s rights and conservation in the Amazon rainforest. He can often be found hiking or cycling. Daniel is from St. Paul, Minnesota.