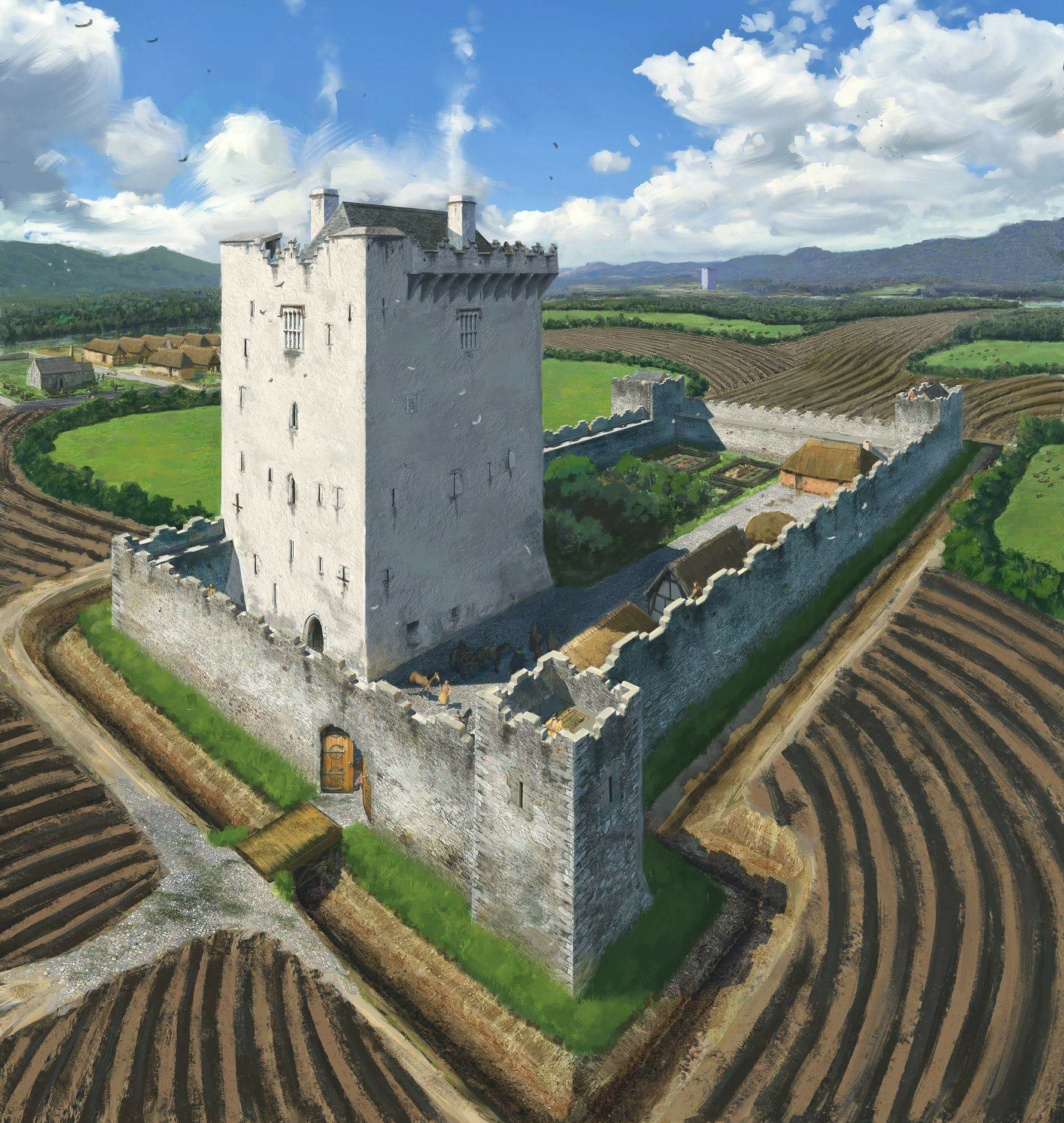 Recently I have been going over some of my older images and retouching them a bit, like this old image I did in 2015. Its of a tower house, which were a type of late medieval Irish castle, believed to have originated around 1300, or sometime within the 14th century, but most are probably from the 15th to the 17th centuries. They are found quite commonly around Ireland, an estimate on the number originally built ranges from 3,500 by some sources, to 7,000 by others, even today, most of Ireland remaining 3,000 castles are tower houses. By the 17th century, this would have made Ireland the most heavily castelllated part of the British Isles. The tower house signifies changes in Ireland, in one hand it shows a resurgence in Gaelic power in the west and the slow reconquest of Ireland, after years of decline following the coming of the Normans in from the 12th century. On the other side it is a sign of the collapse of centralised power in the form of the English monarchy and a rise in decentralisation. This decentralisation of power was to continue in Ireland from the 14th century to the early 17th century with the final (and the first complete) conquest of Ireland by Queen Elizabeth.
Tower houses can be found elsewhere too, across the water in Scotland and Northumbria and on the continent in France also, some have even suggested at times these areas are the origin of the tower house in Ireland but most now believe the origin lies in a native progression, starting in the Anglo Norman areas and spreading West. It was in the West and South though, that they can be found in most abundance and also in the most evolved and elaborate forms. Tower houses were actually built by various parts of Irish society, while the major lords kept building large enclosure castles or extending them, some also built smaller tower houses, but it was mostly the lesser tenants who were building them, and it spread further down the chain to even priests and rich merchants building them in the towns. In fact some argue that the proliferation of tower houses was a sign of a new class rising and making itself heard.
It has been found in some surveys in certain areas, that 1 tower house in 5 has a Bawn wall in Ireland, a Bawn is the external wall you see attached to the castle shown here. The bawn here is based on a combination of evidence, including; Barryscourt, Dunlough, Kilcrea castles, among others. The actual design of the tower house itself though is nearly entirely based on Kilcrea tower house, in Cork, my favourite tower house and one which I have visited a few times and read extensively on. The only changes to the overall design of Kilcrea was the inclusion of a second chimney for the kitchen room inside, and the machicolation (the spikes you see that come down off the top floor, which had gaps in the floor to drop objects on attackers, based off Blarneys), I added these elements so the castle would be more representative of Tower houses as a whole. Also the crenellation (the regular gaps in the walls at the roof & bawn, which provided cover for archers) in the castle are a style specific to late medieval Ireland, the bawn crenellation are based off Blarney castle.
Notice as well how white the tower house is? This is probably how most tower houses would have looked, as they were coated with a substance called Harling, a mixture of limewash and crushed pebbles. Because of this, commentators at the time often mention the white gleaming castles of the Irish, as you can imagine these would have been visible for miles around and been quite a symbol of power and prestige. You may also see the little figure on the dark side wall of the tower house, these were Sheela-na-gigs, a type of sculpture common in Ireland at the time, this one is based off the one in Ballynacarriga castle. Tower houses are believed to have been surrounded by mixed farming, some cereal with animal husbandry too as shown in the illustration. Often they are found associated with churches and friaries, some were even built attached to churches, and some probably werent too far from some sort of clustered settlement. The natural landscape around the castle is actually inspired by the Lee valley basin around Kilcrea castle.Note as well the dry moat, not all tower houses had moats, but some did, like Kilcrea, so I included it here
Notice also the slight batter (where the wall comes outwards at the bottom to defend against a battering ram), also in the bawn towers. As you can see though, the real bling in the tower house is the top of it, this is where most showing off happened with turrets, crenellations, chimneys, gabled/pitched roofs and machicolations, as shown here. Another place they showed off was the ashlar(fine finished masonry) windows, the top floor in Kilcrea was believed to be the hall with the floor directly below the lords chambers, hence why they have the nicest windows, especially the hall floor. Also notice the variety of windows, some were narrow slits just for archers to fire from inside, others have the addition of a cross slit, which could be used by crossbows too and then there were others with either triangular or circular holes, these were for later fire arms, some windows even had all three. All these windows, except for the decorative ones on the top floors, would have been splayed inwards allowing maximum cover for archers in the event of an attack.